Burgers (and The Guys Clean Up) 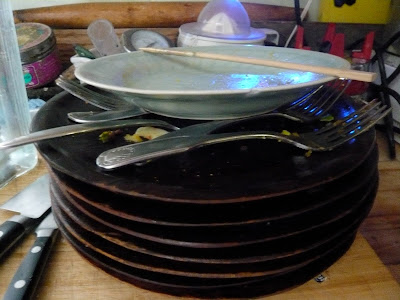 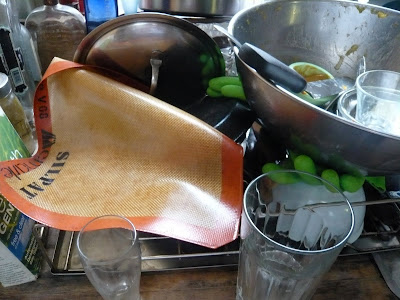 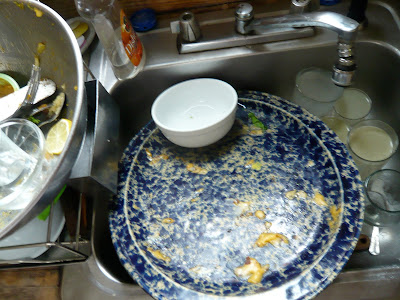 When I was told the guys were barbecuing and all I had to do was make the potato salad and burger fixings, I was psyched. I believed them. Still it was a bicker-fest between neo-big-green-egg-expert hubs and first born son who I understood was, “maning the grill.” I can grill better than both of them put together but I decided to shut up and let them do their thing which was hilarious (sort of)–watching them one-up each other. I wish I was showing you pics of the wonderful spread: cheeseburgers, potato salad, shredded lettuce, pickles, thin sliced white onion, sliced tomatoes, special sauce, delicately toasted buns (both whole wheat and white)–and plenty of them. There were 13 fully loaded cheeseburgers for a group of seven young plus men, one young lady and myself. I was lulled into complacency–so much that I didn’t even take a photo. When they told, me–don’t worry–we’ll clean up, I dosed off on the couch only to awake at 2am and amble to the bedroom.

BUT–when the morning came, I went in to the kitchen to make coffee and saw the biggest mess, I was flabbergasted,–“this is clean, I said to myself?” No, this is just a centralized and gathered MESS. So, lest you think I have this all figured out, you’re wrong. Mad Hungry devotes a whole chapter to Manly Jobs:the art of cleaning the kitchen. You might think I’m writing from the viewpoint of success–but, obviously from the pic above, I am in an uphill struggle to survive. But, I shan’t give up. Neither should you.