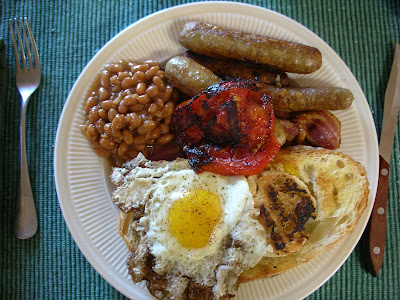 Yes folks: sausage, bacon, baked beans, toast, egg and griddled tomato. Yes, this was eaten by a teenage boy several hours before his soccer tournament. (The foolproof fried egg technique from Mad Hungry was not followed by him). I wanted to add mushrooms too but he was like, no thanks. And, here’s the thing–it was followed by a 12 ounce smoothie loaded with fruit and yogurt too. What can I say–this is the breakfast of a mad hungry boy athlete. While this may seem excessive to some it is so much better for him than the crappy processed food they will be selling at the game location vending machines.