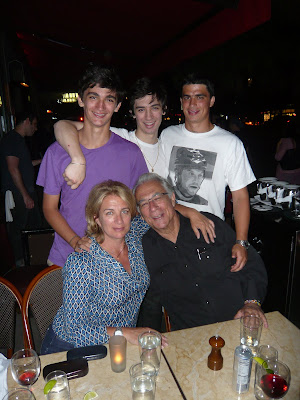 This is the first official post although the previous ones were done by me–except I was practicing blogdem, blogness or whatever it is. My first foray into techno-land (as some of you know) is facebook: the Mad Hungry Facebook page. I was so scared to upload my first photo that it took week to get started. For those of you who might recall sending actual letters, remember putting them in the post box and opening the chute a couple times just to make sure they went in? That’s how it felt. Then Twitter, which I’ve been less successful with– trying to figure out how to be relevant. I mean who gives and crap what I’m doing that very minute, right? But still, I will persevere. Why any of it at all? Here’s the deal.

This cookbook called Mad Hungry: Feeding Men and Boys is the culmination of a life spent chilling and eating with a gang of them. The boy/man thing just means that cooked food must be available, tasty and bountiful at all times otherwise there is a stampede, riot or freak attack. So, since I figured out how to do it and even how to have fun with it, I figured I’d share the shenanigans. So, I guess I want the book to be seen and heard. Meanwhile, my sons can now cook too which is good for them and would be a fine thing for any other man too.
The book comes out soon. It’s very cool. Mostly because I was lucky to hitch this wagon to Artisan Books–seriously the most awesome publisher there is. They are still making kick ass, beautiful, lush original cookbooks at a time when everyone is scared shitless to be too different.
So, this is an original looking book, cover, paper, design but with familiar feeling recipes that work without too much trouble and included are some words to the wise for anyone who, like me, needs help or adult supervision at times.
I’ll post regularly here about boy/mannish/woman -who-dig-them stuff and also keep a calendar of the upcoming book tour, TV and radio dates for anyone who cares. Leave me comment so I know there is someone out there! Meanwhile, the potatoes smell like they’re burning and I need to pour another dainty finger of Bourbon for my bad self.
One love. LSQ
Categorised in: Stories