The Man, The Ribs, The Tatt 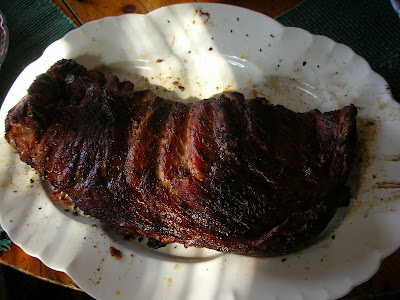 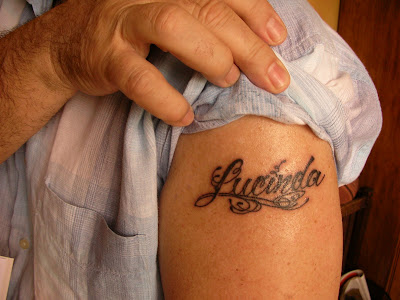 Richie’s ribs are on p. 165 of MH but if you don’t have the book and need the recipe–check some of the news feeds on the right of this blog because the recipe is excerpted somewhere.

Tis the season to be ribbin’ it. This rub is so fresh (in the rapper sense of the word) that I often don’t even use sauce. But, you can use your fav bbq sauce at the very end of grilling (not too early in the ‘ cueing or you’ll have a fire flare-up) and for table dipping too. I came across this image which was the last test drive before I wrote the recipe for the book. And, don’t you know–the ribs here are sitting on my great aunt Lina’s ravioli platter which ah-em…I haven’t seen in the house since– which means– someone broke it, discarded the evidence and hoped I’d forget which I did until now. My dad carted this platter around from state to state, kitchen to kitchen because it reminded him of his childhood days in Rome, New York when the Italian grandma’s and aunts just kept the food flowing. This platter was actually warped from all the oven heating.

Next, tatt discussion, part 2; long before middle boy got tatted up–his pops did it. Yes, one fine morning on a monumental wedding anniversary, he asked when I wanted my present. Sure we were talking diamond necklace or something, I asked for time to sit down and open my present properly. Eerily–all the boys were up too, much earlier than ever. As I busied about watering the plants etc, hubs says–“but you don’t have to open it,” as he pulls up his sleeve to show me my NAME BURNED INTO HIS ARM??? (See the freshly imprinted flesh above). For someone who usually isn’t speechless–I could not speak. My next reaction was, “Boys–you may not do this with some random girlfriend” to which they said, “duh.”

I spent the rest of the day, walking around the city in disbelief that someone actually wanted my name on his body. And, diamond necklace notwithstanding–it’s just about the hottest and most romantic thing that’s ever happened to me. And, its the gift that keeps on giving because it makes me feel loved every time I see it. But, on the occasion of hubs birthday this week, the inevitable question which often comes up did–when will I get his name tattooed on my arm? To which I responded as I always do–NFW!!! No how’s that for romance? I have to find another way to take HIS breath away.