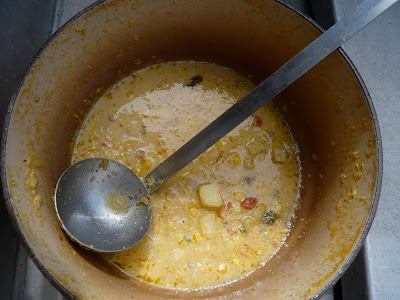 Hey folks, I’m back from the wild wiLD, WILD WEST but more on that later when I can really talk about it. I’m really happy to be home, having been really out of touch, connectivity and all my usual routine. I missed my family mad amounts even though I had one son traveling with me.

Returning to fathers day, my moms 80th birthday and our wedding anniversary all on this day means I have a lot of love-giving to catchup on. I just wanted to share this Corn Chowder recipe which was made to sustain us on a very long and chilly boat trip overnight. Take 4 ears of corn and cut off the kernels: puree half the kernels, keep half whole. Boil the skinned cobs for a while to make a light corn broth. Meanwhile saute chopped onion, minced garlic, chopped bacon (natch), chopped jalapeno and sweet red peppers until softened. Add a cubed potato or two, the corn kernels, the pureed corn and the corn broth. Cook for about 30 minutes and add 1 cup of grated Monterrey jack cheese–stir until melted. Lastly stir in some cream of half and half. Salt and pepper to taste. I could not stop eating this soup!

Btw, I’m glad to be reconnected to everyone and daily posts will resume henceforth.